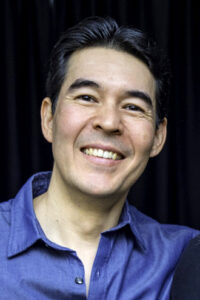 Aaron Murakami was born on Grand Forks Air Force Base, just outside of Grand Forks, North Dakota. He spent the first 19 years of his life as a military dependent moving from base to base around the world. Aaron attended high school on Yokota Air Force Base, about 30 miles east of Tokyo, Japan.

After he returned to the United States, where he attended Sinclair Community College and Wright State University in Dayton, Ohio. His original goal was to get a degree in software engineering. Due to major corruption he witnessed and experienced by the U.S.A.F. against his family during the time his father was retiring in 1993, he was compelled to rebel against the establishment, dropped out of college and went back and forth to Japan many times staying with his friends from high school while he figured out what he wanted to do with his life.

This was an extreme time in Aaron’s life mentally, physically, emotionally and otherwise, which pushed him to the point of having multiple, mystical and paranormal experiences that manifested many profound synchronicities. These uncanny events led him down the path of seeking knowledge about the universe and the mind and how it all connected.

Once back in Spokane, Washington where he has lived since the early 1990’s, these strange experiences continued to increase in frequency and fortunately, there were always witnesses to testify to their occurrences. Aaron was compelled to research ancient taboo history, physics, numerology & astrology, free energy, herbology, mind power, religion and and just about every esoteric topic he could find books for.  He isolated himself for months, meditated up to six or more hours a day, and the experiences became more even more frequent and more intense.

This led to him meeting his first and most important mentor, Rodger Q. Estes. Rodger was the first Westerner recognized by the Chinese Qigong Delegation in Beijing as being a “natural born” Qigong Master. Many years before then, Rodger experienced the Stigmata, bleeding of the hands, at St. John’s Cathedral here in Spokane on Good Friday. Rodger never knew he developed healing abilities from the Stigmata until Dr. Charles T. McGee, another mentor, noticed that the patterns on Rodger’s hands were similar to the high-level qigong master’s in China that he had researched. From Roger, Aaron learned a great deal about cultivating and directing subtle life-force energies, practical thinking regarding inventions and manufacturing, biochemistry, and other related topics. Rodger considered Aaron his protégé.

Aaron eventually obtained a Bachelor of Science degree in Natural Health and eventually came to own a popular vitamin-grocery store on the Northside of Spokane. In spite of its success, he closed the store in 2006 in order to pursue other projects full time.

The primary focus at this time was a mind power enhancement technology, which had it’s roots in the fact that a team of Technical Remote Viewers who provided the Pentagon with intelligence data had discovered the primary operating principle. In the popular movie The Matrix, Neo “downloads” kung fu to his mind. This mind technology is the closest thing to that concept that has ever been available to the public. Aaron developed a multi-tiered affiliate program for the company, built a sales team of people from all over the world, was the #1 producer in the company 118 out of the 120 months (10 years) that the technology was available from 2006 to 2016. He became the Director of Special Projects and he develop multiple “modules” for this technology, which included one of the most popular, which was a method for increasing the occurrences of synchronicities in one’s life. Aaron has advanced this technology and wishes to make it available once again when the time is right.

Some of Aaron’s other mentors, in the field of Tesla and the Free Energy sciences, include Peter Lindemann, John Bedini, Jim Murray, Eric Dollard, Paul Babcock and others. He is committed to the development and distribution of information in the Free Energy sciences, and is founder of Energetic Forum and Energy Science Forum, which have a combined membership of over 130,000 people from around the world. His Energy Times and other newsletters have a combined subscribership of over 105,000.

In 2008, Aaron co-founded A & P Electronic Media with Peter Lindemann and several years back, Peter retired from this company and Aaron has taken the publishing to where there are over 150 books and video presentations published – most are digital downloads with five paperbacks published on Amazon dealing with specialized electrical engineering mathematics. These books and videos are considered the most authoritative sources of information in the world that pertain to the Tesla and Free Energy sciences.

In 2012, he co-founded the Bedini-Lindemann Energy Conference, which is now known as the Energy Science & Technology Conference. These annual conferences are held in Northern Idaho, close to Spokane, Washington every July, and have been attended by people from all over the world. What separates this conference from any other similar conference is that 10 different technologies over 10 years has been demonstrated that produce more net energy than what the operator must pay for on the input. This does not mean more is going out than in, but it does mean more is going out than what we put in so therefore, the potential to do extra work is obviously coming from other external input. This does not violate any laws of physics and is easily explained by non-equilibrium or “open system” thermodynamics.

One of his favorite developments is his patented Plasma Ignition System, which obsoletes every performance ignition system in automotive history. It is able to instantly “burn” hydrogen right out of water or any other hydrogen source. This enables an engine to run partially on water with much less fuel, more power, more mileage and less emissions. One some tests done by independent researchers around the world, his ignition method was able to run various small engines on 100% water but he admits the size of the plasma discharges to accomplish that is so large that it will cause instant damage to the internal parts but it at least proved the point.

His current research project is a joint effort with Eric Dollard, the modern-living Tesla who knows more about the nature of electricity than anyone alive. They are building an audio and radio frequency system that demonstrates the destruction of energy, long distance telluric Earth transmission, the creation of a counterspace node, which is a doorway into another dimension, the ability to cause a gas to emit colors that are not associated with the gas’ color spectrum, ultra-high fidelity music that comes out of a mono-polar electrical flame and more. This is the most advanced Tesla research, with demonstrable results, since Tesla was alive.

Aaron Murakami is a multidisciplinary researcher, inventor, conference organizer, and electronics manufacturer. His goal is to wake people up to the reality of taboo science that is suppressed in mainstream academia in a way that is simple for most laymen to understand coupled with the fact that there are real demonstrations that support his claims.